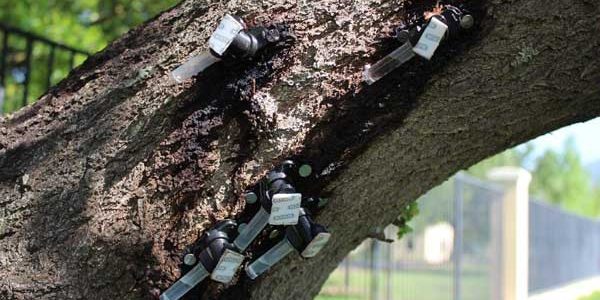 Initial research findings from Vergelegen Wine Estate in Somerset West, the site of an  intensive three-year research project on the invasive shot hole borer beetle, have generated some valuable insights:

This is according to a research report from PhD candidate Heather Nependa from the Department of Conservation Ecology and Entomology in the Faculty of AgriScience at Stellenbosch University. Nependa is working under the guidance of Professor Francois Roets.

There are 14 infected trees at Vergelegen, says the estate’s Risk and Commercial Manager Leslie Naidoo. One English Oak, two Boxelders, two Trident Maples and one Japanese Maple  have been treated.

Vergelegen is an ideal natural research lab as  the 321-year-old estate is home to a vast collection of historic trees. Its  history and biosphere are considered a microcosm of urban and peri-urban areas in South Africa, says Naidoo.

Vergelegen uses two trap types to monitor the beetles. One is a chemical lure in a plastic bottle, intended to repel beetles from trees. The other is a 3D-printed trap secured over holes made by beetles on infected trees, with steel mesh over each opening to prevent  the pests from escaping.

Beetle counts held every two weeks at the chemical traps revealed a sharp increase in numbers during April and May, when about 500 beetles were collected at each inspection. These numbers began to decrease in June and July with about 10-20 beetles per inspection.

At the 3D traps, the first beetles also emerged in April and May.

“This data has been very valuable as we are now more informed about the seasonal distribution of the beetle,  which will help inform how to manage them,” says Nependa.

To further unravel beetle biology and behaviour, 50 plots (15mx10m) were set up around each chemical trap. Each tree in a plot was surveyed and many factors recorded, such as evaluating entry holes, sap flow and other signs of boring. These variables were first assessed in April and July and will take place every three months.

“Early results show that the use of quercivorol and verbenone (chemical lures) has been crucial in keeping PSHB infestations low, with only three out of 50 plots having PHSB infestations,” says Nependa.

She is also investigating the use of an insecticide, emamectin benzoate,  and a  fungicide, propiconazole.

The first set of these chemical injections was applied in February and March this year. Injected trees are monitored every 28 days, revealing that beetle infection rates have slowed in these trees, with not many more than 10 new holes observed.

The remainder  of the chemical trial started in late October, both at Vergelegen and in the surrounding area. English Oak and London Plane trees are injected with either propiconazole, emamectin benzoate, or both.

In addition to these measures, a good deal of prep work has taken place in a  Stellenbosch University lab. This includes breeding beetles to test their colonisation of chemically treated trees. There are currently 10 active colonies from which live beetles will be collected.  A symbiotic fungus (Fusarium euwallacea) is also being grown in the lab. This will be innoculated into the chemically treated trees to measure the effect of the chemicals on fungus growth.

Predicting the economic impact of the beetle also requires  remote sensing work. This is  largely desktop-based, using satellite images taken in 2019 and 2020.

“The imagery is used in machine learning models, which are being trained to distinguish between evergreen and deciduous trees, and infected and non-infected trees.

“This data is used to produce classified maps,  after which a time-series analysis will provide more insight into how trees respond to various infestation levels, and how this ultimately impacts or changes tree functioning and their ecosystem services. Monitoring these changes over time will help inform early detection procedures,” says Nependa.

“Carbon and nitrogen were selected because they are readily available in host trees and their quantities in host trees reflect the health of the host. Carbon measures usually indicate water stress, while  nitrogen measures pollutants in the environment. They also affect how the fungus – and in turn the beetles – will develop,” says Nependa.

An isotope analysis experiment is also  being conducted with the help of the Stable Light Isotope Laboratory in the University of Cape Town’s archaeology department. Wood samples have been collected from two beetle reproductive hosts,  English Oak and London Plane trees, and two non-reproductive hosts, Wild Olive and Camphor trees.

“These trees represent different levels of stress and will hopefully give an indication of what kind of stress the trees are under. After the isotope evaluation, the selected trees will be used in beetle development and fungal growth experiments.”

Research continues until June 2022, says Naidoo. Findings will be shared via Stellenbosch University’s Department of Conservation Ecology and Entomology.

“Trees provide so many benefits, from their natural beauty to helping  to stop climate change. We are delighted that Vergelegen can play a role in helping to find out more about this pest, so that we can protect our precious arboreal heritage.”