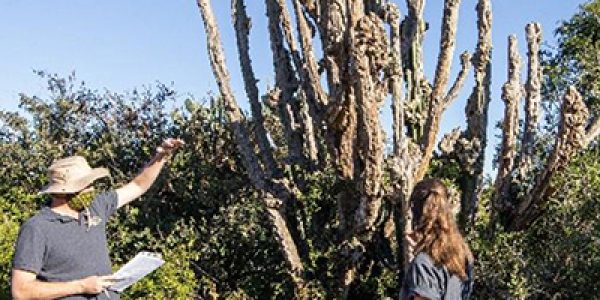 The spread of invasive cactus across the Eastern Cape is a disaster for wool, livestock and game farmers. Cactus infestations overrun grazing land, are barriers to livestock movement and have spines that are expensive to remove from wool destined for market and harmful to livestock and game.

A team from Rhodes University has developed nature-based solutions to the problem. Scientists at the Centre for Biological Control are offering small-scale farmers a free package of insects, which will get to work ‒ eating and controlling ‒ three species of invasive cacti.

South Africa is a leader in nature-based biological control. Funded by the Department of Department of Forestry, Fisheries and the Environment, entomologists at Rhodes University’s Centre for Biological Control (CBC) have reared thousands of insects that feed on particular invasive cactus species.

Three insects that are able to control invasive cactus are being made available – at no cost – to small scale farmers across the Eastern Cape.

The project is aiming to reduce hundreds of hectares of invasive cacti from across the farming regions invaded by three species:

What insects are available to control these three invasive cacti?

–   That only feeds on Devil’s Rope Cactus (Cylindropuntia imbricata)

–   That only feeds on Queen of the Night Cactus (Cereus jamacaru)

–   That only feeds on Creeping Prickly Pear Cactus (Opuntia cespitosa)

What should you do if alien cacti are invading your farm or communal land?

o   There are 35 invasive cacti listed on the National List of Invasive Species.

o   If your farm is plagued with any of the three invasive cacti targeted in this campaign Zezethu will arrange for biological control insects to be sent to your property.

Note: The three insects currently offered to farmers ONLY feed on the three targeted invasive cactus species identified for this project. If these three cactus species are not invading your farm, the insects are of no use to you.  However, records of other species of cactus that are invading farmlands are most useful for the Centre for Biological Control as we plan on how best to manage these species.

For more information, go to www.invasives.org.za or the Centre for Biological Control, Rhodes University.