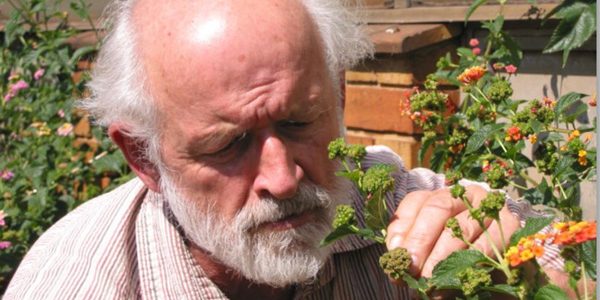 South Africa is an international leader in biological control – one of the most important tools in the war against invasive species.   Biocontrol is all about identifying host-specific insects, mites or fungi that can target and control invasive alien plants.

In a moving tribute, Hildegard Klein traces the career of entomologist – Stefan Neser

Dr Stefan Neser, once described as ‘one of the best field entomologists of our time’, has left indelible footprints at the Agricultural Research Council’s Plant Health and Protection (ARC-PHP) division, as well as in the lives of all those who were so privileged to have come into close contact with him.

Upon obtaining a B.Sc. from the University of Pretoria in 1961, Stefan started his career as regional entomologist at the Department of Agriculture. One of his research projects, a study of Chrysodeixis acuta, a recently discovered pest on tomatoes, potatoes, and bananas, formed the subject of his M.Sc., which he obtained with distinction in 1964.

By this time, he had caught the attention of Dr D.P. Annecke of the Plant Protection Research Institute (PPRI) (the predecessor of ARC-PHP), who was looking to create a research unit aimed at the biological control of invasive alien plants.

Stefan was recruited into this team, and soon left for Australia to study potential biocontrol agents against Hakea species. This investigation culminated in a doctorate in insect ecology from the Australian National University, Canberra, in 1968, titled Studies on some potentially useful insect enemies of needlebushes (Hakea spp. – Proteaceae).

During these years, he married Ottilie Kritzinger, another entomologist trained at the University of Pretoria, who assisted and supported him in his research and became his inseparable companion for life.

Having identified several promising insect species that affected seed production in Hakea spp., Stefan returned to South Africa in 1968 to establish laboratory and quarantine facilities at Stellenbosch to accommodate the natural enemies.

As this was the first weed biocontrol project undertaken independently by South Africa, there were no existing protocols to guide him. Stefan developed the safety protocols for studying and releasing imported potential biocontrol agents, which are still followed today. He also developed the system whereby the biocontrol researchers submit the results of their host-specificity testing to the relevant Government department, thus applying for authorisation for the release of the biocontrol agents from quarantine.

The war against invasive Australian wattles in South Africa

During this period, he initiated and supervised biocontrol projects against several other invasive plant species in the Fynbos region, e.g. St John’s wort (Hypericum perforatum), several Australian Acacia species (A. longifolia, A. melanoxylon, A. mearnsii and A. cyclops), the closely related stinkbean (Paraserianthes lophantha) and Australian myrtle (Leptospermum laevigatum). Besides the very promising insects, he also discovered pathogens and mites that were damaging the target species.

He stayed in Stellenbosch until 1980, followed by two more years of exploration in Australia.

In 1982, Stefan was appointed as Assistant Director of the newly established Weed Research Unit in PPRI, and was therefore transferred to Pretoria.

He became the leader in the field of biological weed control in this country, guiding a group of some 15 professionals, who were stationed at laboratories at Pretoria (Gauteng), Stellenbosch (Western Cape) and Uitenhage (Eastern Cape), together with an entomologist based in Argentina. He also supervised contract research at three South African universities.

His pragmatic and far-sighted approach to problem solving, together with his almost legendary knowledge of insect-plant interactions, enabled him to introduce a whole new approach to biological weed control. He was the first person to advocate and implement the use of seed-attacking insects on their own in biocontrol and has achieved some astounding successes with this approach in the Fynbos region.

Whereas Australian plants invading the Western Cape were the initial research focus of the Weed Research Unit, the scope now widened to include plant species from the Americas and Europe, which invaded the Northern and Eastern parts of South Africa.

Under Stefan’s management, aquatic weeds in South Africa became targets for biocontrol for the first time.

Stefan was appointed to Specialist Scientist at PPRI in 1987, a position which freed him from administrative duties to concentrate on his own research. During 1993, he was made Programme Manager of all weed biocontrol pro-jects, and was promoted to Senior Specialist Scientist in 2000.

More recently he surveyed Mexico for biocontrol candidates against lantana, yellow bells (Tecoma stans) and Crofton weed (Ageratina adenophora). He was personally involved in most of the weed biocontrol projects in South Africa.

Stefen Neser’s greatest contribution to the

of invasive weeds in their country of origin.

During the years as part of a government department, when only one person per year per institute was granted permission for an overseas visit, and before funding by the Working for Water Programme made extended surveys possible, these visits were opportunistic and often cut short by tight budgets.

It was therefore critically important to find the target plants and their closest relatives quickly, to select the most promising natural enemies, to collect suitable numbers and to deliver them to South Africa in a healthy condition. This is where Stefan’s perceptivity, his amazing ability to locate the right plants and insects, and his dedication were invaluable.

As colleagues can attest, he used to work very long hours collecting in the field, with no thought of meals or his own comfort. Inadequate air freight facilities in certain countries often obliged him to carry all the collected material with him throughout his visit, and he often spent most of the night taking care of the insects. His knack for rearing insects has ensured very high survival rates.

He could seldom resist to look wider than the planned target species, recording or collecting natural enemies on plant species that were emerging as weed problems in South Africa if he came across them by chance, and has thus probably averted sever-al potential invasive disasters.

During most of these exploration visits, Stefan took one or more colleagues under his wings and subtly mentored them in the science (or art?) of finding, evaluating, and collecting promising natural enemies and taking care of them.

Most biocontrol researchers in South Africa have learned the art of their trade from Stefan while exploring for biocontrol agents in some foreign country, and most of us will cherish those valuable experiences for the rest of our lives. He served as inspiration to generations of scientists, practitioners, landowners, and decision-makers in South Africa.

On behalf of Australia, he contributed to the biocontrol of doublegee (Emex australis), bietou bush (Chrysanthemoides monilifera), prickly Acacia (Acacia nilotica) and belly-ache bush (Jatropha gossypifolia) and identified suitable agents against Cape ivy (Delairea odorata) for the USA, and against sickle bush (Dichrostachys cinerea) on behalf of Cuba.

Several of his discoveries also benefited the biocontrol of insect pests. When black scale (Saissetia oleae) was still a pest on citrus and olives in California, Israel and other countries, Stefan found black scale in previously unreported subterranean situ-ations in South Africa, from which he reared numerous, previously unknown, parasitoid species that proved important in controlling black scale in overseas countries. Similarly, he located and collected parasitoids in South Africa to con-trol the soft scale that was threatening ice plant (Carpobrotus sp.), a South African succulent plant, on road embank-ments in California.

Parasitic wasps named in his honour

Wherever Stefan was, he never stopped observing and learning from nature. During his official duties and as member of the Mountain Club of South Africa, his expeditions took him off the beaten track, as attested by a multitude of specimens he lodged with the National Collection of Insects.

The associated observations and host records make these specimens even more valuable. He was honoured by having three parasitic wasp species named after him: the aphelinid Prococcophagus neserorum, the pteromalid Trichilogaster stefani and the cynipid Phanacis neserorum – the latter having been “named after Stefan and Ottilie Neser, for their invaluable contribution to the study of South Africa’s fauna of parasitic Hymenoptera”.

His interest was not restricted to insects either: he made valuable contributions to the National Collections of Arachnids and Nematodes too. One of his hobbies, a fascination with the organisms that cause plant growth abnormalities, led to his collection of hundreds of plant growths together with the eriophyoid mites that caused them. Numerous of these were described by his colleague, the late Dr Magdalena K. P. Meyer (Smith).

His hypothesis that each plant species was host to a different eriophyoid mite species has not been disproved, and this principle has been applied successfully in weed biocontrol.

Mites:  A contribution to Acarology

In honour of Stefan’s contribution to Acarology, one mite genus (Neserella) and three more mite species (Tegonotus stefneseri; Aceria neseri and Tegonotus stefneseri) have been named after him. A spider species, Secthyra neseri also carries his name. Stefan was the first person ever to record a wasp (Aprostocetus sp.) feeding on a nematode in a plant gall.

He was the recipient of a number of prestigious awards: the Dave Annecke Award for Outstanding research in weed science in 1986; the Senior Captain Scott Award for his Outstanding Contribution to Science (by the SAAWK) in 1994; the NSTF award (as part of a team) for the Corporate organisation making the most significant contribution to Science and Technology over a period of 10 years in 2001; and the Peglerae Award by the Magaliesberg Section of the Mountain Club of South Africa.

Stefan retired officially from ARC-PPRI (now ARC-PHP) at the end of April 2007, after 46 years of dedicated service to this institution. This was, however, not the end of his research career.

He worked as extraordinary professor at the Forestry and Agricultural Biotechnology Institute (FABI), at the University of Pretoria, where he mentored younger colleagues on the intricacies of finding and testing natural enemies of various eucalypt pests. This research unit has been exceedingly busy dealing with an unprecedented influx of new eucalypt pests, and several biocontrol agents have been released successfully.

It took an aggressive brain cancer to snatch away this incredibly productive researcher, naturalist, mentor, and warm-hearted human being, who had been regarded as indestructible by those who tried to keep up with him. He is, and will continue to be, sorely missed.

PrevPreviousEntomology and Biocontrol: Internships for graduates